Save 15% on Everything at the https://nyvapeshop.com/ Online Head Shop with promo code: 15Ruff

Box mods are the pinnacle of vaping technology. They combine functionality with versatility by offering set of features that allow users to adjust wattages and temperatures, as well as use a large variety of attachments. The SteamCloud mod embodies all of these features into a small, sleek box. It is one of the smallest box mods I have seen yet it does not sacrifice any of the functionality found in larger sized mods.
The SteamCloud fits any 510 threaded attachments, so the list of atomizers or wax burners you can attach to it is nearly endless. The wattages you can control vary from one watts all the way up to forty, so you can use the SteamCloud with small atomizers or the beefier sub-ohm atomizers. One of my favorite aspects of the mod is how it is small and easy to transport. It is easy to stow it away in your pocket or bag when on the go, and won’t bulge out like a bulkier box mod would.
When the first box mods started to hit the vaping market, there were the large devices that inevitably led to people turning their heads to take a second look at what we were holding. While they worked wonders for pulling giant clouds, they were far from discreet. This turned a lot of people away from these mods, people who did not want to stand out in the crowd as that guy who lugged around a box that hardly fit in his pocket.
The SteamCloud addresses this issue wonderfully with a sleek little box mod that won’t even be visible in most people’s hands. Another great aspect is the battery life. Box mods are known for having long lasting battery lives as the battery is the majority of what is inside the box. One of the main reasons people switch to box mods is because they want to vape all day without the hassle of charging their battery every few hours.
While you may think a mod as small as the SteamCloud probably won’t have the longest battery life, you would be surprised. I found it held its charge throughout the day. It comes equipped with an easily removable 1300mAH battery that should last the average person a whole day on a full charge. The battery itself is concealed behind a magnetic cover that is easy to remove. This makes swapping the battery out a piece of cake if you have an extra on hand.

What’s in the Box
The SteamCloud Box Mod Vaporizer review would not be complete without going over the contents with the kit. Instead of coming inside a box, the SteamCloud arrived in a black, protective travel case, which is a nice touch that adds to the convenience and portability of the mod. Inside the case was the SteamCloud box mod, a small instructions pamphlet, and a micro USB charging cable. The cable was a tad short, but it is a micro USB cord, and I had a few longer ones laying around.

Save 15% on Everything at the nyvapeshop.com Online Head Shop with promo code: 15Ruff

This site uses Akismet to reduce spam. Learn how your comment data is processed. 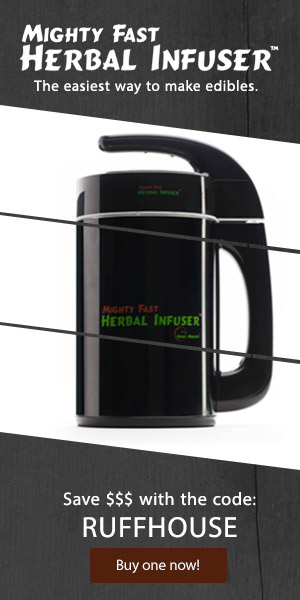 3 Ways to Use Rosin Chips with MyPress Rosin Press